Johnny Lytle(Pacific Jazz 20125)-"Done It Again"-LP. Some tracks include-Done It Again,People,Sunny,The nearness Of You plus more!Johnny Lytle (born John Dillard Lytle on October 13, 1932, Springfield, Ohio; died December 15, 1995, Springfield) was a jazz musician.Considered one of the top vibes players in the world, Lional Hampton said Lytle was "the greatest vibes player in the world," Lytle was known for his great hand speed and showmanship. He was also a songwriter penning many of his own hits, including "The Loop," "The Man," "Lela," "Selim," and the jazz classic "The Village Caller." Lytle recorded more than 30 albums for various jazz labels including Tuba, Jazzland, Solid State and Muse. Throughout his career he performed and recorded with jazz greats the likes of Louis Armstrong, Lionel Hampton, Miles Davis, Nancy Wilson, Bobby Timmons and Roy Ayers. Lytle was such an admirer of the music of the Miles Davis that he wrote "Selim" (Miles spelled backwards) in honor of Davis, which features Davis' former pianist Wynton Kelly. He also featured his son, Marcel Lytle, on several recordings as a vocalist and drummer. Lytle never recorded with any of the major record labels and that could be why he never gained the status of a jazz icon like some of his peers. Feeling he would lose control of his music and creative development; he played what came natural to him, and being with a major label might not have afforded him that opportunity.He found success early in his career with chart-topping albums like A Groove, The Loop, and Moonchild. From his swinging uptempo tracks to his soul-satisfying ballads, Lytle knew how to keep a groove. And with a nickname like "Fast Hands," he could always keep the attention of an audience. In addition to his musicianship, his gregarious personality made him a popular attraction on the jazz circuit. Even though he did not experience the same success he was privileged to during the '60s, he did continue to record and build a respectable catalog of music with recordings in the '70s,'80s and '90s.The LP has been autographed on the front by Johnny Lytle.........CONDITION OF VINYL,COVER AND AUTOGRAPH IS WEAK VG. 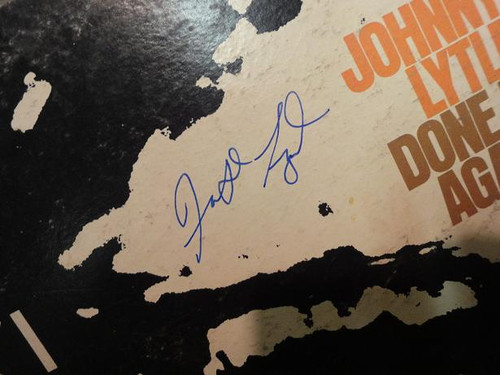