This item is a 4" X 5 1/2" color photo card from Italy featuring Jeff Lynne. The color photo card is from 1974 and is part of a series called "Picture Pop '74".Jeffrey "Jeff" Lynne (born 30 December 1947) is an English songwriter, composer, arranger, singer, multi-instrumentalist, and record producer who gained fame as the leader and sole constant member of Electric Light Orchestra. He was later a co-founder and member of the Traveling Wilburys together with George Harrison, Bob Dylan, Roy Orbison, and Tom Petty. Lynne has produced recordings for artists such as The Beatles, Paul McCartney, Ringo Starr, Brian Wilson, Randy Newman, Roy Orbison, Dave Edmunds, Del Shannon and Tom Petty. He has co-written songs with Petty and also with George Harrison, whose 1987 album Cloud Nine was co-produced by Lynne and Harrison. Among the many compositions to his credit are such well-known hits as "Livin' Thing", "Evil Woman", "Turn to Stone", "Do Ya", "Strange Magic", "Sweet Talkin' Woman", "Telephone Line", "Mr. Blue Sky", "Hold on Tight", "Don't Bring Me Down", "I Won't Back Down", "Free Fallin'", "Handle with Care", and "End of the Line".The photo trading card has been autographed on the front by Jeff Lynne.............BOTH PHOTO CARD AND AUTOGRAPH ARE IN VERY GOOD CONDITION. 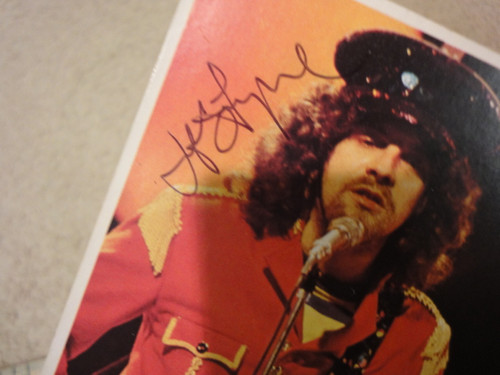