This item is an 8" X 10", black and white photo of actress Ida Lupino.

Ida Lupino (4 February 1918 – 3 August 1995) was an English-American actress, singer, director, and producer. Throughout her 48-year career, she appeared in 59 films and directed eight, working primarily in the United States, where she became a citizen in 1948. She is widely regarded as the most prominent female filmmaker working in the 1950s during the Hollywood studio system. With her independent production company, she co-wrote and co-produced several social-message films and became the first woman to direct a film noir, The Hitch-Hiker, in 1953. Among her other directed films, the best known are Not Wanted, about unwed pregnancy (she took over for a sick director and refused directorial credit); Never Fear (1950), loosely based upon her own experiences battling paralyzing polio; Outrage (1950), one of the first films about rape; The Bigamist (1953) (which was named in the book 1001 Movies You Must See Before You Die); and The Trouble with Angels (1966). Her short yet immensely influential directorial career, tackling themes of women trapped by social conventions, usually under melodramatic or noir coverings, is a pioneering example of proto-feminist filmmaking. As an actress, her best known films are The Adventures of Sherlock Holmes (1939) with Basil Rathbone; They Drive by Night (1940) with George Raft and Humphrey Bogart; High Sierra (1941) with Bogart; The Sea Wolf (1941) with Edward G. Robinson and John Garfield; Ladies in Retirement (1941) with Louis Hayward; Moontide (1942) with Jean Gabin; The Hard Way (1943); Deep Valley (1947) with Dane Clark; Road House (1948) with Cornel Wilde and Richard Widmark; While the City Sleeps (1956) with Dana Andrews and Vincent Price; and Junior Bonner (1972) with Steve McQueen. The photo has been autographed by Ida Lupino...................BOTH PHOTO AND AUTOGRAPH ARE IN EXCELLENT CONDITION. 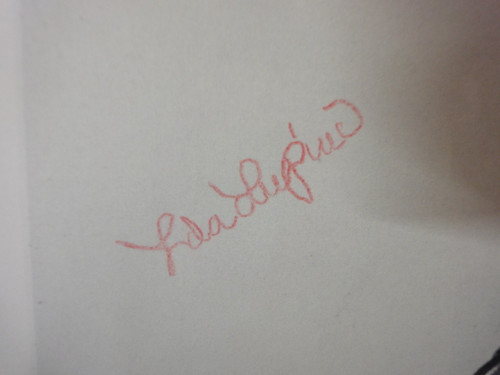