This item is a 9 1/2" X 13",color lithograph photo of Lindsay Lohan,Liz Smith and Cindy Adams.Red-haired, wide-eyed and freckled, Lindsay Lohan began modelling at age three and then appeared in dozens of TV ads as a youngster, including a Jell-O pudding spot with Bill Cosby. The role of Alli Fowler in the soap opera Another World (1996-97) gave Lohan her first real long-form experience. As she entered her teens she starred in a string of kid-friendly Walt Disney films: as long-separated twin sisters in The Parent Trap (1998, with Dennis Quaid); bringing a favorite doll to life in Life-Size (2000, with supermodel Tyra Banks); switching bodies with her mother (Jamie Lee Curtis) in the 2003 comedy Freaky Friday; and driving a famous Volkswagen Beetle in Herbie: Fully Loaded (2005, with Matt Dillon). She showed fewer freckles and more curves in the high school comedy Mean Girls (2004, with Rachel McAdams); the film was a big hit and made her a star. At the same time she became a tabloid magazine favorite as she grew up in the public eye. She gained a reputation as a wild child fond of late-night revels, a notion which seemed confirmed when she made a brief stay at a rehab facility in January of 2007, then was arrested that May and charged with drunk driving. She entered rehab briefly again, but made headlines the following July for another arrest for driving under the influence. In 2010, a judge sentenced her to 90 days in jail, plus another 90 days in rehab, after Lohan skipped court dates and otherwise seemed to thumb her nose at various legal requirements rising from her arrests. Her other films include the Manhattan romantic comedy Just My Luck (2006), director Robert Altman's last film, A Prairie Home Companion (2006, based on the radio show of Garrison Keillor) and Georgia Rule (2007, starring Felicity Huffman). Lohan also has dabbled in pop music, releasing the albums Speak in 2004 and A Little More Personal (Raw) in 2005.The lithograph photo has been autographed on the front by Lindsay Lohan,Liz Smith and Cindy Adams.........BOTH PHOTO AND AUTOGRAPHS ARE IN VERY GOOD CONDITION. 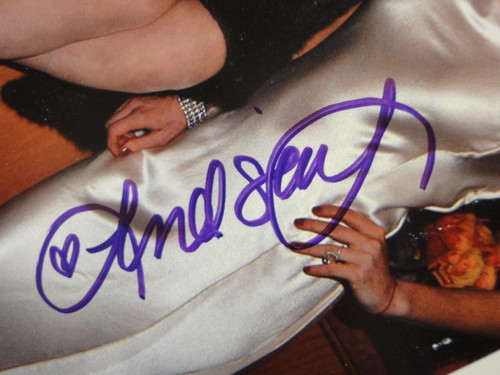