This item is a 7" X 9",black and white photo of actresses Heather Locklear and Catherine Oxenberg in two scenes from the telvision series-"Dynasty". The photo has a dated,typed byline on ABC Stationery.Heather Deen Locklear (born September 25, 1961) is an American actress. She is primarily known for her television work, her most notable roles being, "Sammy Jo Carrington," on the 1980s soap opera, Dynasty, "Officer Stacy Sheridan," in the 1980s cop drama, T.J. Hooker, "Amanda Woodward," on the 1990s soap opera Melrose Place, and, "Caitlin Moore," on the sitcom, Spin City....Catherine Oxenberg (born September 22, 1961 in New York City) is an American actress, best known for her performance as Amanda Carrington on the 1980s American prime time soap opera Dynasty. Through her mother, she is a descendant of the Serbian Kara?or?evi? dynasty.The photo has been autographed on the front by Heather Locklear and Catherine Oxenberg.................CONDITION OF PHOTO,BYLINE AND AUTOGRAPHS IS EXCELLENT............... 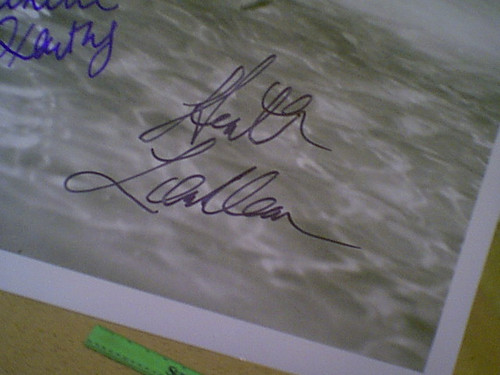