Time Magazine-August 16,1954-104 pages. This vintage Time Magazine-which originally sold for twenty cents features a color cover of actress Gina Lollobrigida-"On the Tiber's banks-a new Hollywood". The magazine also features a 5 page article with photos on Gina.Gina Lollobrigida was one of the first European sex symbols to emerge from the rubble of World War II. "La Lollo" used a mix of voluptuous curves and intelligent sensuality to conquer Europe and then the world in movies and magazines in the 1950s. A former art student and model, Lollobrigida spent most of her career in Italy, where the title of her 1955 film The Most Beautiful Woman in the World (La Donna Piu Bella del Mondo) became her nickname. She also starred in a handful of American films, including Beat the Devil (1953, with Humphrey Bogart), Solomon and Sheba (1959, with La Lollo as the Queen of Sheba and Yul Brynner as Solomon), and the romantic comedy Come September (1961, with Rock Hudson). In later years Lollobrigida became both a sculptor and a photojournalist and published several books of photography.The Time magazine has been autographed on the front cover by Gina Lollobrigida with a fountain pen in black.................BOTH MAGAZINE AND AUTOGRAPH ARE IN VERY GOOD CONDITION.............. 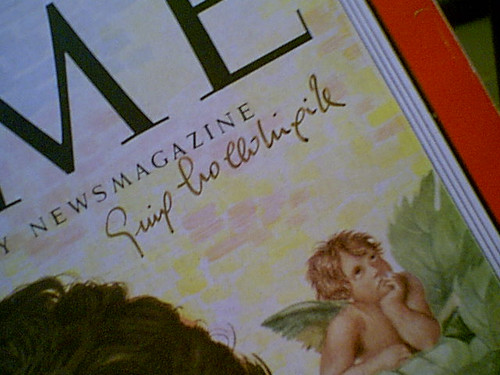