"Modern Mecanix And Inventions"-April 1935-154 pages. This vintage magazine-which originally sold for fifteen cents-features a color cover image of the Lockheed "Aero Drive Monorail Express" plus an article with photos by Allan Lockheed entitled- "Building Stratosphere Air Liners"................Allan Haines Lockheed (Allan Haines Loughead; January 20, 1889 – May 26, 1969) was an American aviation engineer and business man. He formed the Alco Hydro-Aeroplane Company along with his brother, Malcolm Loughead, that became Lockheed Corporation. Loughead legally changed his name to Allan Lockheed, the phonetic spelling of his family name to avoid spelling confusion, in 1934. He went on to form two other aircraft manufacturing companies in the 1930s. Both were unsuccessful. After World War II, he continued his career as a real estate salesman while occasionally serving as an aviation consultant. Allan Lockheed kept an informal relationship with the Lockheed Aircraft Corporation until his death in 1969 in Tucson, Arizona. The magazine has been autographed on the front cover by Allan Lockheed...................BOTH MAGAZINE AND AUTOGRAPH ARE IN FINE CONDITION. 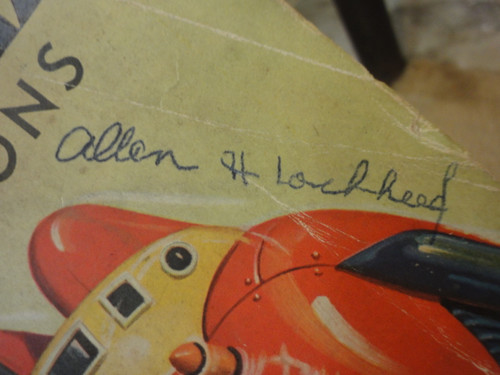