THIS IS AN AUTHENTICALLY AUTOGRAPHED PHOTO BY SUE LLOYD... THIS IS A 8 INCH BY 10 INCH BLACK AND WHITE PHOTO SIGNED BY SUE LLOYD. HAS BYLINE ON ORIGINAL ABC STATIONARY. CONDITION OF THE PHOTO AND AUTOGRAPH IS VERY GOOD. Sue Lloyd (born 7 August 1939 in Aldeburgh, Suffolk) is an English model turned actress with many notable film and television credits to her name. She studied dance as a child and attended the Sadler's Wells Ballet School. As her height (1.73m) increased, this reduced the possibilities for a career as a dancer, and she became a showgirl and model. In 1965, Lloyd was a glamorous foil to Michael Caine as Harry Palmer in the spy thriller film The IPCRESS File. She appeared in Bullet to Beijing (1995), a belated Harry Palmer sequel. Other movie credits include Revenge of the Pink Panther, The Stud and The Bitch. On television, Lloyd made many guest appearances on several popular shows of the 1960s and 1970s, including The Saint, Department S, Jason King, Randall and Hopkirk (Deceased), The Persuaders! and The Sweeney, as well as playing the regular role of Cordelia Winfield, alongside Steve Forrest, in The Baron. In 1971, Lloyd starred in a stage version of the TV series The Avengers playing John Steed's sidekick Mrs Hannah Wild. She is probably best known, however, for her long-running role as Barbara Hunter, née Brady, in the soap opera Crossroads. She first appeared in the series in 1975, and she remained in the role until 1985. She was a close friend of Ronald Allen, her on-screen husband in Crossroads. They married in 1991, a few months before he died of cancer. Sue Lloyd is also a painter 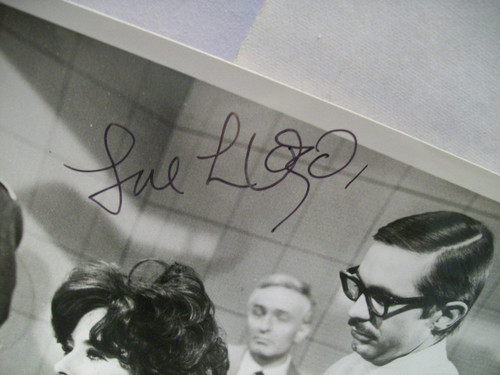