This item is a 6"X 9",black and white lithograph photo of actor Harold Lloyd in a scene from one of his movies.Harold Lloyd was one of the great comedians of the silent film era, right alongside Charlie Chaplin and Buster Keaton. Harold Lloyd first made his way into motion pictures in 1913. After making dozens of silent shorts, Lloyd graduated to writing, directing and starring in feature comedies, and he became one of Hollywood's first movie stars. Lloyd was uncannily athletic in his stunts; his most famous on-screen persona was called simply "Glasses Character," a hapless fellow who was continually in peril. A shot of Lloyd hanging from the hands of a giant clock, 12 stories above a city street, is one of the best-known images of the silent comedy era. (The film was 1923's Safety Last.) Lloyd continued to make films in the sound era, though without the same success, and released compilations into the 1960s.The lithograph photo has been autographed on the front by Harold Lloyd in faded black fountain pen.............BOTH PHOTO AND AUTOGRAPH ARE IN VERY GOOD CONDITION. 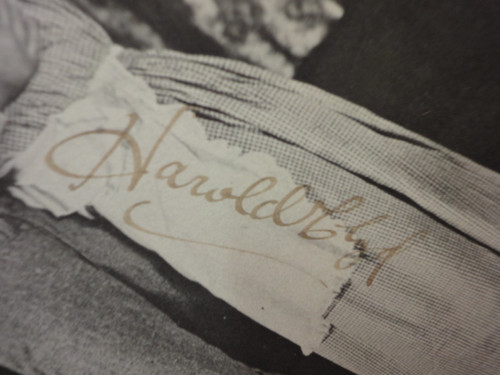