This item is a 9 1/2" X 15",color lithograph photo of actress Emily Lloyd.Emily Lloyd (born Emily Lloyd Pack; September 29, 1970) is an English actress.In 1988, she appeared in Cookie by Susan Seidelman and In Country by Norman Jewison, but both films were box office flops. Her next film was Chicago Joe and the Showgirl. It was directed by Bernard Rose and David Yallop's screenplay based on the well-known "cleft chin murder". In 1989 she received an offer for the film Mermaids by Richard Benjamin. Due to problems with the film's star, Cher, who thought that Lloyd didn't fit as her onscreen daughter, she lost the role to Winona Ryder. Lloyd sued Orion Pictures and received $175,000 in damages. Later in 1992 she appeared in her most successful film to date, A River Runs Through It. In 1997, she appeared in a supporting role in the critically acclaimed film Welcome to Sarajevo by Michael Winterbottom.Her first attempt as a stage actress was as Eliza, opposite Roy Marsden as Higgins, in the 1997 West End production of Pygmalion (Albery Theatre), produced by Bill Kenwright. On the 18 June, only ten days after rehearsals began, the original director walked out. The next day Lloyd left the production, amid rumours of her having been "asked to leave" (a highly unusual step in the theatre-world) and stories of threatened resignations from the rest of the cast if she had stayed.[6] Her part was taken by Carli Norris (which made her name) and Ray Cooney took over as director. Her next theatre work was as Bella Kooling in David Farr's Max Klapper - a Life in Pictures, presented at the Electric Cinema as "a play with film".In 2002, she appeared in the thriller The Honeytrap, shot in London and directed by Michael G. Gunther, in which she starred alongside Valerie Edmond, Anthony Green and Stuart McQuarrie. In 2003, she appeared as Ophelia in Hamlet at the Shakespeare Festival in Leeds and Brighton. In 2004 she was cast in the British television series Denial, the British counterpart to Sex and the City, but according to media reports this show was cancelled. In 2008, she made an appearance in the short film The Conservatory by director Reed Van Dyk.The lithograph photo has been autographed on the front by Emily Lloyd................BOTH PHOTO AND AUTOGRAPH ARE N VERY GOOD CONDITION. 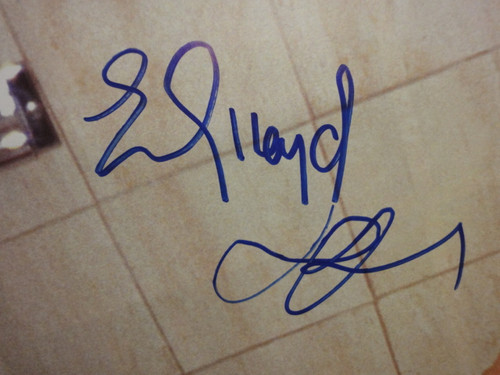