Rona Barrett's Hollywood Magazine-July 1976-82 pages. This vintage magazine-which originally sold for seventy five cents-features a color cover photo of Lindsay Wagner and Farrah Fawcett plus an article with photos.Lindsay Jean Wagner (born June 22, 1949) is an American actress. She is best known for her portrayal of Jaime Sommers in the 1970s television series The Bionic Woman (for which she won an Emmy Award), though she has maintained a lengthy career in a variety of other film and television productions since....Ferrah Leni "Farrah" Fawcett (February 2, 1947  June 25, 2009)was an American actress and artist. A multiple Golden Globe and Emmy Award nominee, Fawcett rose to international fame when she posed for her iconic red swimsuit poster and starred as private investigator Jill Munroe in the first season of the television series Charlie's Angels (197677).Fawcett later appeared off-Broadway to critical approval and in highly rated and critically acclaimed television movies, in roles often challenging, such as in The Burning Bed and Poor Little Rich Girl: The Barbara Hutton Story and sometimes unsympathetic, such as in Small Sacrifices.The magazine has been autographed on the front cover by Lindsay Wagner and Farrah Fawcett...............BOTH MAGAZINE AND AUTOGRAPHS ARE IN VERY GOOD CONDITION. 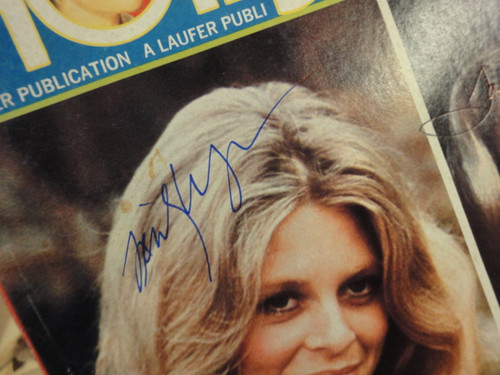