THIS IS AN AUTHENTICALLY AUTOGRAPHED LP BY VIRNA LISI AND ANTHONY QUINN.. THE ORIGINAL SOUND TRACK ALBUM-MGM PRESENTS-A CARLO PONTI PRODUCTION-THE 25TH HOUR-MUSIC COMPOSED BY GEORGES DELERUE(MGM E 4464 ST) RELEASED IN 1967-COVER IS SIGNED BY ANTHONY QUINN AND VIRNA LISI. During the film, a constable frames Quinn as being Jewish. He is sent to concentration camps as punishment. Eventually he is deemed part of the Aryan race and enlists as an SS soldier. The picture is based on real events. It includes Hungary's government in collaboration with the Nazis, the encroachment of Rumania by Stalin's troopers, and other happenings. CONDITION OF THE VINYL,COVER, AND AUTOGRAPHS IS VG La Vingt-cinquième Heure (The 25th Hour) is a 1967 war drama film, starring Anthony Quinn and Virna Lisi. It was produced by italian producer Carlo Ponti and directed by french director Henri Verneuil. 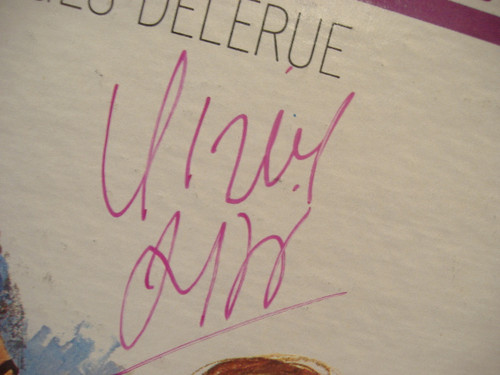