G. Gordon Liddy-"Out Of Control"-1979-St. martin's Press-6" X 9"-305 pages-hardcover book-with jacket-Signed By Author.George Gordon Battle Liddy (born November 30, 1930) was the chief operative for the White House Plumbers unit that existed during several years of Richard Nixon's Presidency. Along with E. Howard Hunt, Liddy masterminded the first break-in of the Democratic National Committee headquarters in the Watergate building in 1972. The subsequent cover-up of the Watergate scandal led to Nixon's resignation in 1974; Liddy served four and a half years in prison for his role in the burglary. Liddy later became an American radio talk show host, actor and political strategist. Liddy's radio talk show is now syndicated in 160 markets and on both Sirius Satellite Radio and XM Satellite Radio stations in the United States. He has also been a guest panelist for Fox News Channel in addition to appearing in a cameo role or as a guest celebrity talent in several television shows.The book has been autographed on the title page by G. Gordon Liddy..............BOTH BOOK AND AUTOGRAPH ARE IN VERY GOOD CONDITION.............. 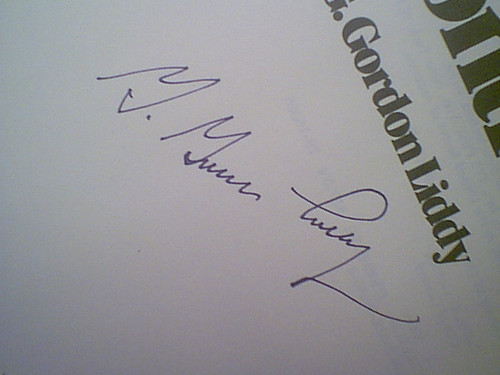