This item is a 7" X 7",black and white lithograph photo of actor George Lindsey.George Lindsey is an American character actor, best known for his role as "Goober Pyle" on The Andy Griffith Show, as well as for his tenure on Hee-Haw.In 1964, he got his big break as the slow-witted but kindly "Goober Beasley" on the now legendary The Andy Griffith Show. His character was eventually renamed "Goober Pyle" to retain the same name as his cousin Gomer Pyle, another slow-witted yokel played by Jim Nabors, another Alabamian. Goober's antics frequently included his exaggerated "Goober Dance" and his comically bad Cary Grant impression ("Judy, Judy, Judy").As Lindsey started his portrayal as Goober, he also had a minor role in the Walter Brennan series The Tycoon on ABC. Lindsey also had a role in Voyage To The Bottom of the Sea entitled Submarine Sunk Here.After Griffith left his television show, CBS retooled it as Mayberry R.F.D. and Lindsey played the same character, until CBS cancelled R.F.D. in 1971. Later in the 1970s, Lindsey guest starred on "M*A*S*H" as Roy Dupree, a Southern surgeon working at the 8063rd Unit who switched places at the 4077th with Hawkeye Pierce.The lithograph photo has been autographed on the front by George Lindsey...........BOTH PHOTO AND AUTOGRAPH ARE IN VERY GOOD CONDITION. 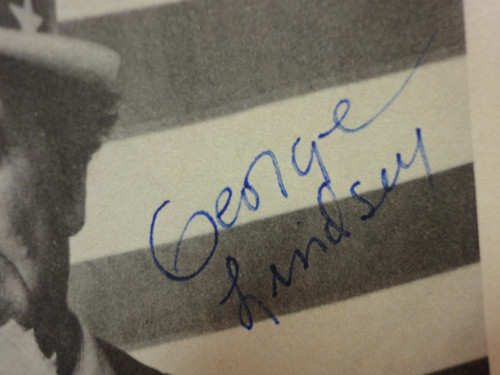