"George Goober Lindsey Goes To Town"(MCA 5353)-Sealed LP. This still sealed LP features George "Goober" Lindsey from "The Andy Griffith Show" performing comedy stories plus The Andy Griffith Theme".A high school teacher and athletic coach in his native Alabama, George Lindsey decided in his early 20s that his destiny lay in the theater. Lindsey and his wife packed themselves off to New York, where he studied diligently at the American Theatre Wing. He spent a great deal of time losing his Southern accent, only to be forced to regain it when he found he couldn't get any work as a "Yankee." At first cast in unpleasant or sinister roles, Lindsey was forever pigeonholed as comedian when he played the one-shot role of Goober Beasley on a 1963 episode of The Andy Griffith Show, scoring a bull's-eye of hilarity with his inept celebrity impressions. When next he appeared on Griffith, he was Goober Pyle, cousin to Mayberry's resident village idiot Gomer Pyle. And when Gomer (aka Jim Nabors) was spun off into his own series, Lindsey became a Griffith regular. He stayed with Goober until 1971, by which time The Andy Griffith Show had evolved into the Griffith-less Mayberry RFD. He then joined the Hee Haw troupe, remaining with that popular syndicated TV variety series for two decades. Lindsey extended his oafish TV persona into his big-screen work, appearing in such films as Take This Job and Shove It and Cannonball Run II. Far wittier and more versatile than the hapless Goober, Lindsey has remained a popular attraction on the TV convention/country-western concert/rodeo circuit; he has made several singing appearances on The Grand Ole Opry, and for many years was a judge at the Miss USA pageant. In 1995, George Lindsey (assisted by Jim Beck and Ken Clark) published his autobiography, Goober in a Nutshell. A piece of shrink wrap has been removed from the front cover and the LP has been autographed there by George Lindsey.........RECORD IS STILL SEALED IN GORGEOUS CONDITION.CONDITION OF AUTOGRAPH IS EXCELLENT...................... 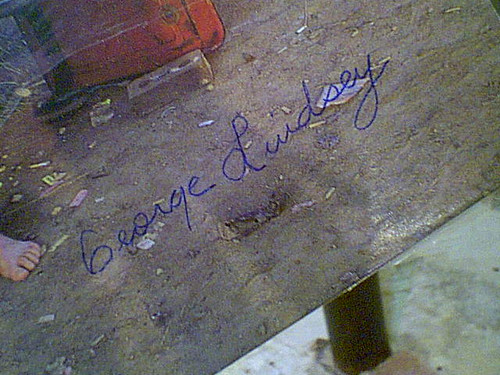