Playbill for the Music Box Theatre New York-"Ira Levin's Deathtrap"-1978-5" X 9"-48 pages-Theatre Program. Deathtrap is a play written by Ira Levin in 1978 with many plot twists and which references itself as a play within a play. It is in two acts with one set and five characters. It holds the record for the longest-running comedy-thriller on Broadway, and was nominated for four Tony Awards, including Best Play.[Deathtrap was well received by many and has been frequently revived. It was adapted into a film starring Michael Caine, Dyan Cannon and Christopher Reeve in 1982......Ira Marvin Levin (August 27, 1929 – November 12, 2007) was an American novelist, playwright, and songwriter. His most noted works include the novels A Kiss Before Dying (1953), Rosemary's Baby (1967), The Stepford Wives (1972), and The Boys from Brazil (1976), as well as the play Deathtrap (1978). Many of his novels and plays have been adapted into successful films. The Playbill has been autographed on the front cover by Ira Levin.......................BOTH PLAYBILL AND AUTOGRAPH ARE IN EXCELLENT CONDITION. 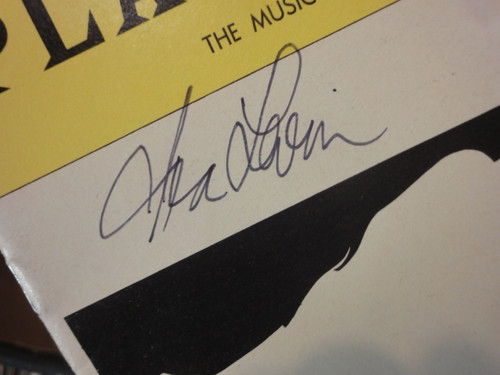