This item is an 8" X 10",black and white photo of actor/director Sheldon Leonard.The archetypal side-of-the-mouth Runyonesque gangster, Sheldon Leonard's actual mean-streets experience was confined to travelling with a fairly benign teenaged gang in a New York suburb. In fact, if we are to believe his future business partner Danny Thomas, Leonard never met a bonafide gangster until Thomas introduced him to one in the mid-1950s! A graduate of Syracuse University, Leonard began his acting career on radio and the stage, appearing in such Broadway productions as Kiss the Boys Goodbye and Having Wonderful Time. Starting with 1939's Another Thin Man, Leonard made a good living as a movie mob boss, henchman, and all-around tough guy. He played a rare leading role (and a romantic lead, to boot) in PRC's Why Girls Leave Home (1944). Leonard was also a regular on radio's Jack Benny Program, playing a laconic racetrack tout. During the 1950s and 1960s, Leonard became a successful television producer, overseeing such sitcoms as The Danny Thomas Show, The Andy Griffith Show, The Dick Van Dyke Show and Gomer Pyle USMC. He also spearheaded I Spy, the first TV action series with an African American star (Bill Cosby). His television activities extended to the domain of Saturday morning cartoons, as the voice of animated character Linus the Lionhearted. Sheldon Leonard continued producing into the mid-1970s, renaming his production company Deezdemandoze, in honor of his patented gangster patois. Leonard passed away in his home at age 89.The photo has been autographed on the front by Sheldon Leonard........BOTH PHOTO AND AUTOGRAPH ARE IN VERY GOOD CONDITION................. 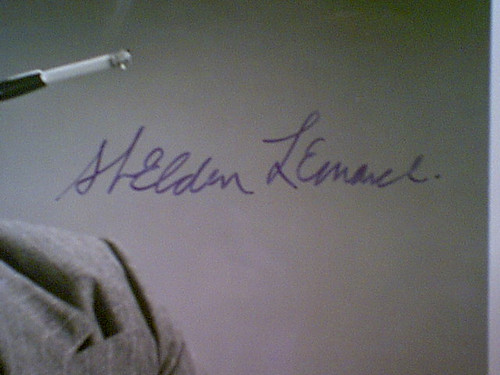