John Lennon and Paul McCartney were one of the most successful songwriting teams of the 20th century, as well as forming half of the superband The Beatles. Together they wrote dozens of hit tunes, ranging from "Help!" and "Ticket to Ride" to "Penny Lane" and "Let It Be." John Lennon was first among equals in the band: he wrote or co-wrote nearly all of their hits, sang lead on many songs, and drove the band with his restless creativity. His romance with Yoko Ono was a major influence on his post-Beatles career, and he collaborated with her on everything from the modern pop hymn "Imagine" to avant-garde noise and poetry. The Beatles broke up in 1970, and John Lennon followed up with a solo career marked by genius and eccentric recordings and public pleas for world peace. (The latter included his hit 1971 single, "Imagine," with lyrics like: "Imagine there's no countries / It isn't hard to do /Nothing to kill or die for / And no religion too.") After a reclusive five years as a family man, John Lennon released an album with Yoko in 1980, Double Fantasy. As their new song "Just Like Starting Over" was reaching the top of the charts, Lennon was shot to death outside the Dakota building, his New York City home, by a schizophrenic fan named Mark David Chapman. John Lennon published two illustrated books of poetry and wit in the mid-1960s: In His Own Write and A Spaniard in the Works… His son Julian Lennon is also a singer and musician… John Lennon’s political positions gained him the enmity of J. Edgar Hoover‘s F. B. I. and the U.S. State Department, and researchers are still trying to get files on Lennon made public. The LP has been autographed on the front cover by John Lennon...............BOTH LP AND AUTOGRAPH ARE IN EXCELLENT CONDITION. 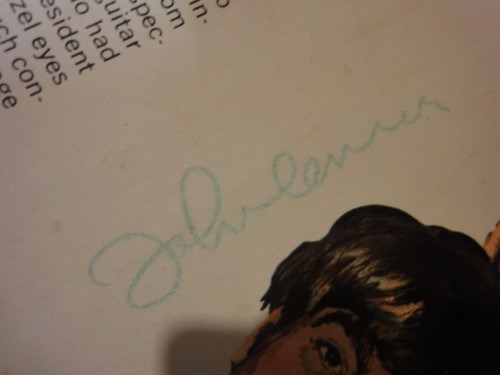