This item is an official Internal Revenue Service Document from the Brookhaven Service Center in New York. It is the tax return of the Spirit Foundation on a 3" X 7" vintage microfilm data card. The microfilm data card contains a six page Internal Revenue Service document which can be read at any university library with the proper equipment. The date of the document is 1979. The card indicates that these are the returns for the Spirit Foundation for the second quarter of 1979.....................The Spirit Foundation was established in 1978 in NY - Founded by John Ono Lennon and his wife, Yoko Ono Lennon. Giving is primarily for human services, international affairs, and women's causes.The EIN -132971714-on the card still matches on the internet search. I guarantee this to be the real original IRS Document.

The late Mr. Lennon was singer, songwriter, author and peace activist, and a member of The Beatles, which was one of the most popular and influential bands in history. During his time with The Beatles, Lennon won 4 Grammy Awards and wrote such songs as "A Hard Day's Night," "All You Need is Love," "Help!," "Strawberry Fields Forever," and, with Paul McCartney, co-wrote "She Loves You," "I Want to Hold Your Hand," and "We Can Work It Out." Along with the group, he starred in films such as "A Hard Day's Night," "Magical Mystery Tour," and "Yellow Submarine." Following the breakup of the band, Lennon embarked on a solo career, and wrote or co-wrote and recorded songs such as "Give Peace a Chance," "Remember," and “Instant Karma.” During this period, Lennon also recorded "Imagine," the song for which he is best remembered. He has been inducted into the Songwriters and Rock and Roll Hall of Fame. Yoko Ono Lennon is an avant-garde musician, Grammy Award winner, artist, political activist and former collaborator with Mr. Lennon. She is known for the songs, "Walking on Thin Ice" and "No, No, No." In 1972, The Lennons hosted "The Mike Douglas Show" for one week, and in 1980 they recorded the Grammy Awarding winning album "Double Fantasy. The microfilm data card has been signed by John Lennon with green ink........................BOTH IRS DATA CARD AND AUTOGRAPH ARE IN EXCELLENT CONDITION. 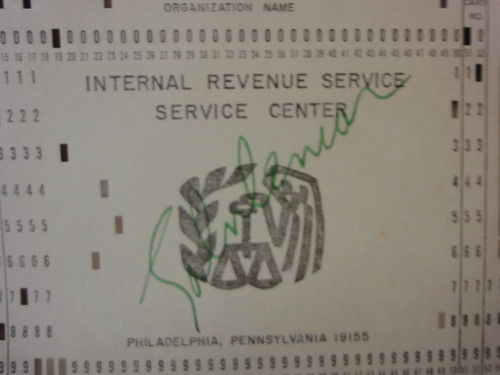