This item is a 7" X 10" page from a vintage Scribner's magazine from March 1908. PLEASE NOTE-this is the page only--not the complete magazine. The page features an advertisement for the Model G Cadillac automobile-price-$2000. Henry Martyn Leland (February 16, 1843 – March 26, 1932) was an American machinist, inventor, engineer and automotive entrepreneur. He founded the two premier American luxury automotive marques, Cadillac and Lincoln. Leland created the Cadillac automobile, later bought out by General Motors. In 1902, William Murphy and his partners at the Henry Ford Company hired Leland to appraise the company's factory and tooling prior to liquidation. Leland completed the appraisal, but he advised Murphy and his partners that they were making a mistake to liquidate, and suggested they instead reorganize, building a new car powered by a single-cylinder engine Leland had originally developed for Oldsmobile. The directors lost no time in renaming the company Cadillac.At Cadillac, Leland applied many modern manufacturing principles to the fledgling automotive industry, including the use of interchangeable parts. Alfred P. Sloan, longtime president and chair of General Motors, considered Leland to be "one of those mainly responsible for bringing the technique of interchangeable parts into automobile manufacturing."The Cadillac won the Dewar Trophy for 1908.Leland sold Cadillac to General Motors on July 29, 1909 for $4.5 million, but remained as an executive until 1917. With Charles Kettering, he developed a self-starter for the Cadillac, which won its second Dewar Trophy in 1913 as a result.He prodded Kettering to design a workable electric starter after a Cadillac engineer was hit in the head and killed by a starting crank when the engine backfired.He left General Motors in a dispute with company founder William C. Durant over producing materiel during World War I. Cadillac had been asked to build Liberty aircraft engines but Durant was a pacifist. Leland formed the Lincoln Motor Company in 1917 with a $10,000,000 wartime contract to build the V12 Liberty aircraft engine. After the war, the company was reorganized, and the Lincoln Motor Company Plant was retooled to manufacture luxury automobiles. The V8 engine used in the first Lincoln automobiles is said to be influenced by the Liberty engine's design.In 1922, Lincoln became insolvent and was bought out by Henry Ford's Ford Motor Company. Ford's bid of $8 million was the only bid at a receivers sale. Ford had first offered $5 million, but the judge would not accept it for a well-equipped company whose assets were conservatively estimated at $16 million. Ford deliberately low-balled his offer as revenge against Leland's role in the creation of Cadillac. The magazine page has been autographed by Henry Leland................BOTH SCRIBNER'S MAGAZINE PAGE AND AUTOGRAPH ARE IN VERY GOOD CONDITION. 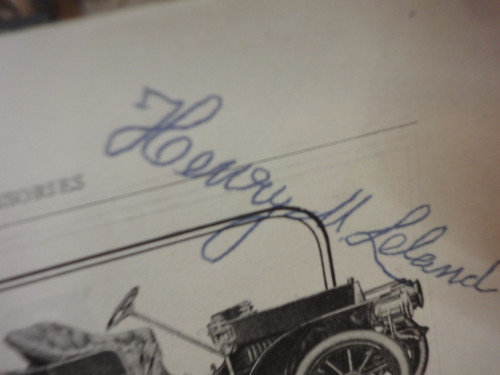