Julius Lester-"Revolutionary Notes"-1969-Richard W. Baron-New York-5 1/2" X 8"-hardcover book with jacket-First Edition-Signed By Author.Julius Lester (born January 27, 1939), also known as Julius Bernard Lester or by his Hebrew name Yaakov Daniel, is an award winning American author of books for children and adults, and was an occasionally controversial professor at the University of Massachusetts at Amherst. Lester is Black and Jewish. He has recorded two albums of folk music.In the early 1960s, Lester became active in the American civil rights movement, first as a folk singer at numerous civil rights rallies and as part of the 1964 Mississippi Summer Project]. He later worked full time with SNCC (Student Non-Violent Coordinating Committee) and traveled to North Vietnam as a photographer to document the effects of the Vietnam War. He co-wrote his first book with Pete Seeger in 1965: The 12-String Guitar as Played by Leadbelly: An Instructional Manual. He recorded two albums of traditional and original songs for Vanguard, "Julius Lester" (1966) and "Departures" (1967). A compilation of selections from both cd's has been released (2006) by Ace Records in England. He has written 45 books for children and adults, dealing with race relations and politics, including 1968's Look Out, Whitey! Black Power's Gon' Get Your Mama!. As a radio announcer on New York City's WBAI, Lester interviewed indiduals involved in a 1968 United Federation of Teachers strike in Brooklyn's Ocean Hill-Brownsville school district. The strike had greatly exacerbated the strain between the African-American and Jewish-American communities, and Lester may have contributed to that strain when he asked one involved man to read an anti-Semitic poem on the air. The book has been autographed on the title page by Julius Lester in black..............BOTH BOOK AND AUTOGRAPH ARE IN VERY GOOD CONDITION.JACKET HAS WEAR.................... 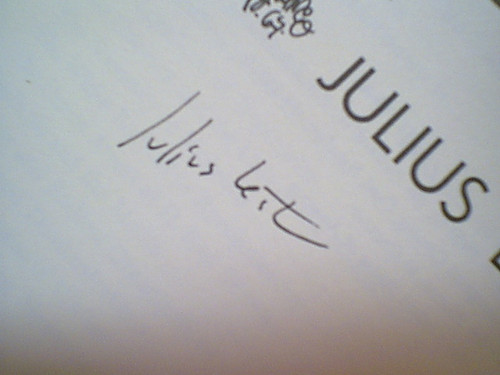