Westbury Music Fair-1966 "The Incomparable Jerry Lewis"-6" X 9"-16 pages-black and white -theatre program. This vintage program features the September 12 thru 18, 1966 performance of Jerry lewis at The Westbury Music Fair with The Nicholas Brothers,The Skylarks and The Wiere Brothers.Jerry Lewis (born on March 16, 1926, according to most sources), is a comedian, actor, film producer, writer and film director known for his slapstick humor and his charity fund-raising telethons for the Muscular Dystrophy Association. Jerry Lewis has won many prestigious Lifetime Achievement Awards from The American Comedy Awards, The Golden Camera, Los Angeles Film Critics Association, The Venice Film Festival and he has two stars on the Hollywood Walk of Fame. Lewis currently resides in Las Vegas, Nevada. Lewis was originally paired up in 1946 with Dean Martin, and formed the comedy team of Martin and Lewis. In addition to the team's popular nightclub work, they starred in a successful series of comedy films for Paramount. The act broke up ten years later. The program has been autographed on page one of the program on the Hirschfeld caricature by Jerry Lewis in black............ BOTH PROGRAM AND AUTOGRAPH ARE IN VERY GOOD CONDITION................. 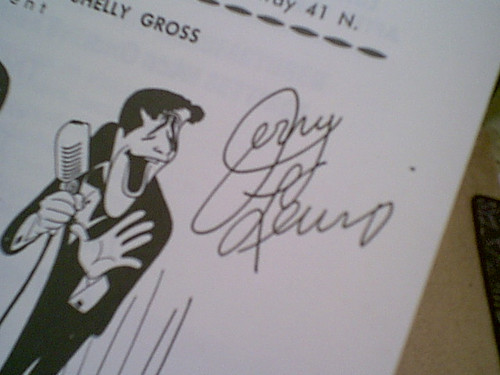