"Ev'ry Street's A Boulevard"-Chappell-1953-Sheet Music. This song is featured in the 1954 Movie-"Living It Up" starring Jerry Lewis and Dean Martin.The 1954 Martin-and-Lewis romp Living It Up is an amusing remake of the 1937 comedy classic Nothing Sacred. More specifically, it is the film version of the Broadway musical Hazel Flagg, which was based on Nothing Sacred. The heroine of the original undergoes a sex change to become feckless Homer Flagg (Jerry Lewis), who is led to believe that he's dying of radiation poisoning. Manhattan newspaperwoman Wally Cook (Janet Leigh), hoping to improve circulation of her paper, convinces her boss, Oliver Stone (Fred Clark), to fete Homer as a hero with an all-expenses-paid trip to the Big Apple. Meanwhile, Homer learns from local doctor Steve (Dean Martin) that he isn't dying at all. But Steve talks Homer into taking advantage of the celebrity treatment bestowed on him by Wally, and a good time is had by all -- until medical specialist Dr. Egelhofer (Sig Rumann) insists upon examining Homer. Highlights include a hilarious bit at Yankee Stadium, and an energetic jitterbug number featuring Jerry Lewis and Sheree North. The handful of songs retained from Hazel Flagg include "Every Street's a Boulevard in Old New York." The sheet music has been autographed on the front cover by Dean Martin with a fountain pen in blue and Jerry Lewis with a fountain pen in black..............BOTH SHEET MUSIC AND AUTOGRAPHS ARE IN VERY GOOD CONDITION... 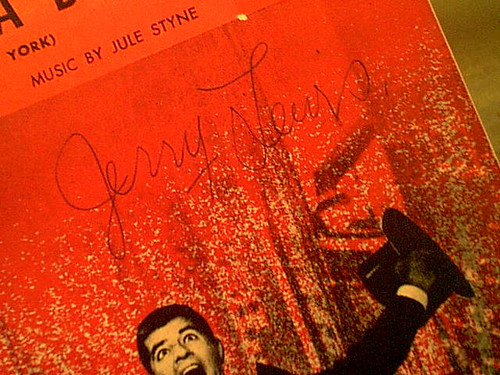