Life Magazine-August 10,1962-86 pages. This vintage Life Magazine-whichoriginally sold for twenty cents-features a full color cover photo of actress Janet Leigh-"Breaks Up The Boys At The Lodge". The magazine also features a 4 page article with photos onJanet Leigh's starring role in "Bye Bye Birdie". In 1946, Leigh's mother was working at a ski lodge where actress Norma Shearer was vacationing; impressed by a photograph of Leigh, Shearer arranged for the girl (whose prior acting experience consisted of a college play) to be signed with the MCA talent agency. One year later Leigh was at MGM, playing the ingenue in the 1947 film Romance of Rosy Ridge. The actress became one of the busiest contractees at the studio, building her following with solid performances in such films as Little Women (1949), The Doctor and the Girl (1950), and Scaramouche (1952)  and catching the eye of RKO Radio's owner Howard Hughes, who hoped that her several RKO appearances (on loan from MGM) would lead to something substantial in private life. Instead, Leigh married Tony Curtis (her second husband), and the pair became the darlings of fan magazines and columnists, as well as occasional co-stars (Houdini [1953], The Vikings [1958], Who Was That Lady? [1960]). Even as this "perfect" Hollywood marriage deteriorated, Leigh's career prospered. Among her significant roles in the '60s were that of Frank Sinatra's enigmatic lady friend in The Manchurian Candidate (1962), Paul Newman's ex-wife in Harper (1966), and, of course, the unfortunate embezzler in Alfred Hitchcock's Psycho (1960), who met her demise in the nude (actually covered by a moleskin) and covered with blood (actually chocolate sauce, which photographed better) in the legendary "shower scene." In the '80s, Leigh curtailed her film and TV appearances, though her extended legacy as both the star/victim of Psycho and the mother of actress Jamie Lee Curtis still found her a notable place in the world of cinema even if her career was no longer "officially" active. The Life Magazine has been autographed on the front cover by Janet Leigh.............BOTH MAGAZINE AND AUTOGRAPH ARE IN VERY GOOD CONDITION................... 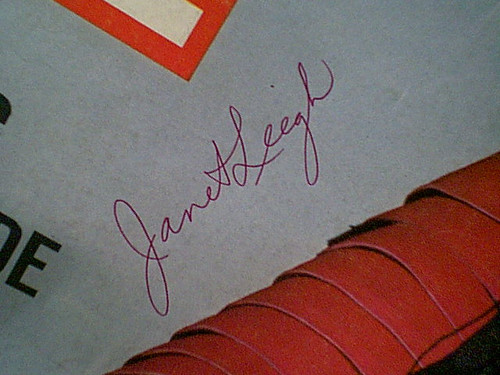