"Space: 1999"-November 1975-Vol.1 No.1-Charlton Comics-color comic book. This vintage color comic book originally sold for twenty five cents."Space: 1999" was one of the more visible sci-fi disasters of early-'70s television, although it started out with some promising credentials. It was produced by Gerry Anderson and Sylvia Anderson, who had been responsible for several fondly remembered series such as Supercar, Fireball XL-5, Stingray, Captain Scarlet & the Mysterons, and Thunderbirds, all built around marionettes and utilizing superb special effects and model work. The Andersons had also produced one intermittently engaging live-action series, UFO, and a fine feature film, Journey to the Far Side of the Sun. The series starred Martin Landau and Barbara Bain, who were the closest thing to a power-couple among television actors in those days (from their work together on Mission: Impossible) and Barry Morse, an excellent Canadian actor. Moreover, the producers started with what, in those days, was an admirable and challenging goal -- to create a television series that tried to follow in the footsteps of 2001: A Space Odyssey (then less than a decade old), mixing lunar settings, interstellar adventure, and a profound sense of cosmic wonder. The story of Moonbase Alpha and its crew, blasted into deep space when the nuclear waste deposited on the moon propelled the satellite out of orbit, was a silly, but intriguing, one once the audience got past the notion of the moon moving fast enough to reach interstellar space.The comic book has been autographed on the font cover by Martin Landau and Barbara Bain.......BOTH COMIC BOOK AND AUTOGRAPHS ARE IN VERY GOOD CONDITION. 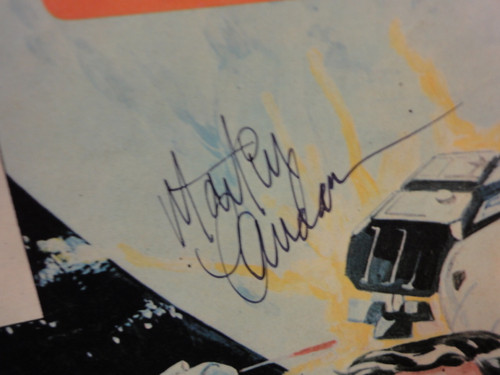