This is an authentically autographed photo by Lorenzo Lamas.. This is a 8 inch by 10 inch color photo signed by Lorenzo Lamas. Condition of the photo and autograph is very good. Lorenzo y de Santos Lamas (born January 20, 1958) is an American actor and reality television participant. Lamas is known for playing Lance Cumson, the irresponsible grandson of Angela Channing (played by Jane Wyman) on the popular 1980s soap opera Falcon Crest, Reno Raines on the 1990s crime drama Renegade, and Hector Ramirez on the daytime soap opera The Bold and The Beautiful. Lamas also served as a judge on ABC television's short-lived reality show Are You Hot?. Currently, he now stars in his own reality show, Leave it to Lamas, a series about his real-life family. 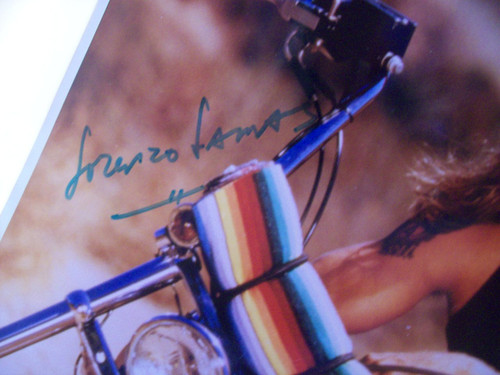