This item is a 7" X 10",color cardboard mini poster of actor Hugh Laurie in the Fox Television Series-"House".James Hugh Calum Laurie, OBE (pronounced /?l??ri/; born 11 June 1959), better known as Hugh Laurie, is an English actor, voice artist, comedian, writer, musician, recording artist, and director. He first reached fame as one half of the Fry and Laurie double act, along with his friend and comedy partner Stephen Fry, whom he joined in the cast of Blackadder and Jeeves and Wooster from 1987 until 1999. Since 2004, he has been starring as Dr. Gregory House, the protagonist of House, for which he has received two Golden Globe awards and several Emmy nominations. The mini-poster has been autographed on the front by Hugh Laurie..............BOTH POSTER AND AUTOGRAPH ARE IN VERY GOOD CONDITION.............. 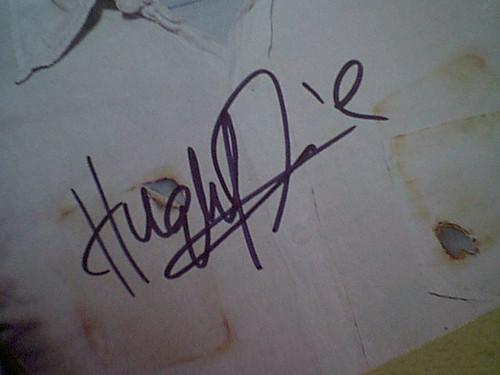