THIS IS AN AUTHENTICALLY AUTOGRAPHED PHOTO BY DINO DE LAURENTIIS... THIS IS A 7 INCH BY 9 INCH BLACK AND WHITE PHOTO SIGNED BY DINO DE LAURENTIIS. CONDITION OF THE PHOTO AND AUTOGRAPH IS VERY GOOD. King Kong is a 1976 American motion picture produced by Dino De Laurentiis and directed by John Guillermin. It is a remake of the 1933 classic King Kong, about how a giant ape is captured and imported to New York City for exhibition. The remake's screenplay was written by Lorenzo Semple Jr., based on the original movie story written by Merian C. Cooper and Edgar Wallace, which had been adapted into the 1933 screenplay by James Ashmore Creelman and Ruth Rose. It starred Jeff Bridges, Charles Grodin, and Jessica Lange, in her first movie role, playing a part similar to the one made famous in the original by Fay Wray. 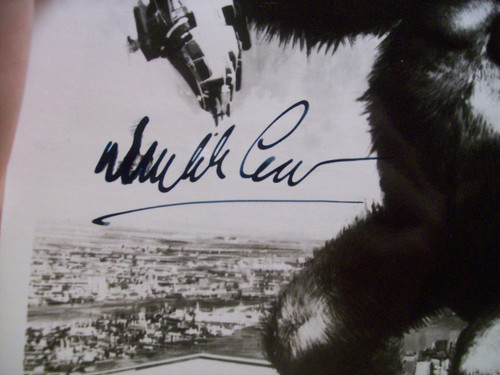