This iem is an 8" X 10", black and white photo of actor Alan Ladd. Alan Ladd was in several B-grade movies early on in his career, then hit it big as the cold-blooded killer, Raven, in 1941's This Gun For Hire. During the 1940s Ladd, who was short, blonde and blue-eyed, played mostly tough guys in movies such as The Glass Key and The Blue Dahlia. Although his star-power waned after World War II, his most famous performance came as the title character in 1953's Shane. In 1962 Ladd attempted suicide, and in 1964 he died from an apparent overdose of alcohol and sedatives. The photo has been autographed by Alan Ladd....................BOTH PHOTO AND AUTOGRAPH ARE IN EXCELLENT CONDITION. 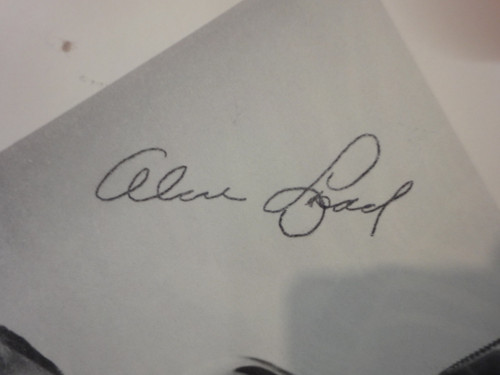