This item is a 10 1/2" X 13 1/2", page from a vintage magazine. PLEASE NOTE-this is the page only-there is no complete magazine.The magazine page features a color advertisement for the 1949 Movie-"The Man On The Eiffel Tower" starring Charles Laughton and Franchot Tone.Though hampered by a small budget that shrank with each shooting day, director Burgess Meredith fashioned a serviceable film version of Georges Simenon's A Battle of Nerves. Retitled The Man on the Eiffel Tower, the film pits Simenon's analytical Inspector Maigret (Charles Laughton) against a wily murderer. We know virtually from the outset that the guilty party is Radek (Franchot Tone), a psychotic with delusions of grandeur who has been seduced into killing the wealthy aunt of slatternly Edna Wallace (Jean Wallace). Maigret suspects Radek , but without solid proof he must suffer the taunting and baiting of the beyond-the-law killer. Eventually Maigret wins the psychological battle, forcing Radek to seek refuge on the titular tower. And if you're waiting for that final fatal fall, this isn't that kind of movie. Burgess Meredith also appears in the film as the sort of obvious suspect that is automatically disregarded by any true detective-story buff, despite the most damning evidence. Originally released in eye-pleasing Anscocolor, Man on the Eiffel Tower is generally available nowadays in washed-out public-domain prints.The magazine page has been autographed on the front by Charles Laughton with a fountain pen in black and Franchot Tone with a fountain pen in blue....BOTH MAGAZINE PAGE AND AUTOGRAPH ARE IN VERY GOOD CONDITION................. 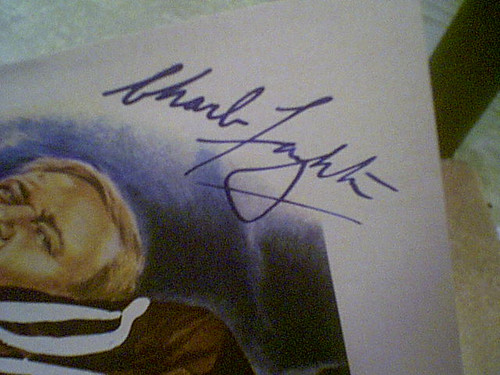