Playbill for the Morosco Theatre-1956-"Major Barbara" starring Charles Laughton and Eli Wallach-6" X 9"-32 pages-theatre program.Major Barbara is a three act play by George Bernard Shaw, written and premiered in 1905 and first published in 1907.The play first opened on Broadway at the Playhouse Theatre December 9, 1915. There have been four Broadway revivals, 1928 at the Guild Theatre, 1956 at the Martin Beck Theatre and then the Morosco Theatre starring Charles Laughton and Eli Wallach, 1980 at the Circle in the Square Theatre, and 2001 at the American Airlines Theatre.The 1956 revival received the Tony Award for Best Stage Technician (Howard McDonald). It was nominated for Best Scenic Design (Donald Oenslager) and Best Costume Design (Dorothy Jenkins).The Playbill has been autographed on the front cover by Charles Laughton with a fountain pen in blue and Eli Wallach with a fountain pen in blue...........BOTH PLAYBILL AND AUTOGRAPHS ARE IN VERY GOOD CONDITION......................... 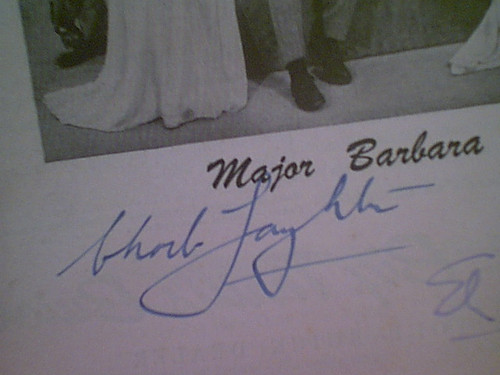