Original Soundtrack-"Trapeze"(Columbia 870-white label DJ)-LP.Former circus aerialist Burt Lancaster was the logical choice to star in the Technicolor drama Trapeze. Lancaster plays a crippled acrobat, disabled after attempting to perform a dangerous triple mid-air somersault. Tony Curtis co-stars as an aspiring aerialist who coerces Lancaster into teaching him the tricks of the trade. The friendship between Lancaster and Curtis is threatened by the arrival of beautiful, ambitious circus tumbler Gina Lollobridgida (it's a toss-up as to which of the three stars looks best in spangled tights). Surprisingly, Lancaster's former circus partner Nick Cravat is nowhere to be found in the film; we are, however, treated to the harmonica virtuosity of Johnny Puleo. Trapeze is highlighted by its truly breathtaking stunt sequences, performed by the cream of the European big-top circuit. The LP has been autographed on the front cover by Burt Lancaster with a fountain pen in black,Tony Curtis with a fountain pen in black and Gina Lollobrigida with a fountain pen in black......CONDITION OF VINYL,COVER AND AUTOGRAPHS IS VG. 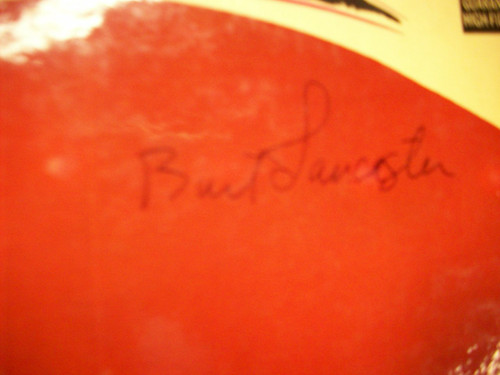