Music From The Original Soundtrack-"Elmer Gantry"(MCA Classics 19070)-Sealed LP. This still sealed LP features the 1970 Movie-"Elmer Gantry" starring Burt Lancaster and Shirley Jones.Elmer Gantry (Burt Lancaster), a drunken, dishonest street preacher allegedly patterned on Billy Sunday, wrangles a job with the travelling tent ministry conducted by Sister Sharon Falconer (Jean Simmons). Thanks to Gantry's enthusiastic hellfire-and-brimstone sermons, Sister Sharon's operation rises to fame and fortune, enough so that Sharon realizes her dream of building her own enormous tabernacle. These ambitions are put in jeopardy when a prostitute (Oscar-winning Shirley Jones), a former minister's daughter who'd been deflowered by Gantry years earlier, lures Gantry into a compromising situation and has photographs taken. It took several years for any Hollywood studio to take a chance with Sinclair Lewis' novel, and when it finally did arrive on the screen, producer/director Richard Brooks was compelled to downplay some of the more "sacrilegious" passages in the original. Also appearing in Elmer Gantry are Arthur Kennedy as an H.L. Mencken-style atheistic journalist, and Edward Andrews as George Babbitt, a character borrowed from another Sinclair Lewis novel.A piece of shrink wrap has been removed from the front cover by Burt Lancaster and Shirley Jones............CONDITION OF RECORD IS STILL SEALED. CONDITION OF AUTOGRAPHS IS EXCELLENT.COVER HAS A CUT OUT NOTCH ON UPPER LEFT CORNER............... 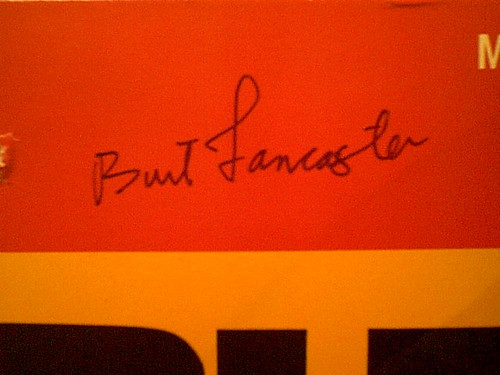