This item is an 8" X 10 1/2",black and white print of a charcoal portrait of actor Burt Lancaster. The portrait print is from 1962 and features Burt Lancaster as he starred in the 1960 Movie-"Elmer Gantry".Elmer Gantry (Burt Lancaster), a drunken, dishonest street preacher allegedly patterned on Billy Sunday, wrangles a job with the travelling tent ministry conducted by Sister Sharon Falconer (Jean Simmons). Thanks to Gantry's enthusiastic hellfire-and-brimstone sermons, Sister Sharon's operation rises to fame and fortune, enough so that Sharon realizes her dream of building her own enormous tabernacle. These ambitions are put in jeopardy when a prostitute (Oscar-winning Shirley Jones), a former minister's daughter who'd been deflowered by Gantry years earlier, lures Gantry into a compromising situation and has photographs taken. It took several years for any Hollywood studio to take a chance with Sinclair Lewis' novel, and when it finally did arrive on the screen, producer/director Richard Brooks was compelled to downplay some of the more "sacrilegious" passages in the original. Also appearing in Elmer Gantry are Arthur Kennedy as an H.L. Mencken-style atheistic journalist, and Edward Andrews as George Babbitt, a character borrowed from another Sinclair Lewis novel.The portrait print has been autographed on the front by Burt Lancaster with a fountain pen in blue.................BOTH PORTRAIT PRINT AND AUTOGRAPH ARE IN VERY GOOD CONDITION................. 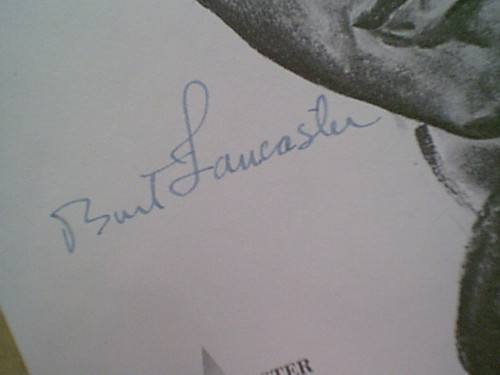