This item is an 8" X 10",black and white photo of actor Burt Lancaster in a scene from the 1976 Movie-"The Cassandra Crossing". The photo has an original typed byline from Avco Embassy Pictures Corp.This bizarre entry into the disaster film genre concerns a group of hapless passengers aboard a transcontinental luxury train who are infected with a viral plague by a group of terrorists. Burt Lancaster plays military man Mackenzie, who wants to send the train across a rickety bridge so all the passengers will die, with Mackenzie reasoning the tragedy will give the terrorist movement a bad name. Among the passengers on the train trying to build up antibodies are Jennifer Rispoli Chamberlain (Sophia Loren); Nicole (Ava Gardner), who is embroiled in an affair with a younger man named Robby Navarro (Martin Sheen); and Dr. Jonathan Chamberlain (Richard Harris), a physician who wants to save the passengers but ends up duking it out with the terrorists. The photo has been autographed on the front by Burt Lancaster.................CONDITION OF PHOTO,AUTOGRAPH AND BYLINE IS EXCELLENT............. 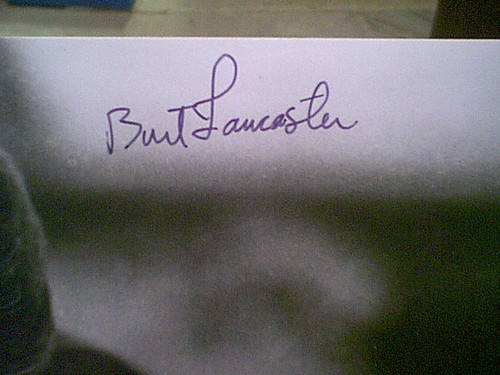