Original Soundtrack-"The Rose Tattoo"(Columbia CL 727)-LP. This LP features the 1955 Paramount Movie-"The Rose Tattoo". The movie stars Burt Lancaster and Anna Magnani and they are featured on the front cover in original scenes.Scripted by famed playwright Tennessee Williams, The Rose Tattoo stars Anna Magnani as Serafina Delle Rose, a Sicilian woman who now lives in the American South. As the film opens, she is still mourning the death of her beloved husband, constantly telling herself stories of their time together. Her fragile emotional existence is shattered when she discovers that her husband had been carrying on with another woman. Luckily, Serafina also meets truck driver Alvaro Mangiacavallo (Burt Lancaster) around this time, and their tentative romance may help her through this troubling time. Williams wrote the script for Magnani, who was awarded an Oscar for her work in the film. The LP has been autographed on the front cover by Burt Lancaster and Anna Magnani in black fountain pen...............CONDITION OF VINYL,COVER AND AUTOGRAPHS IS VG. BACK COVER HAS WEAR..................................... 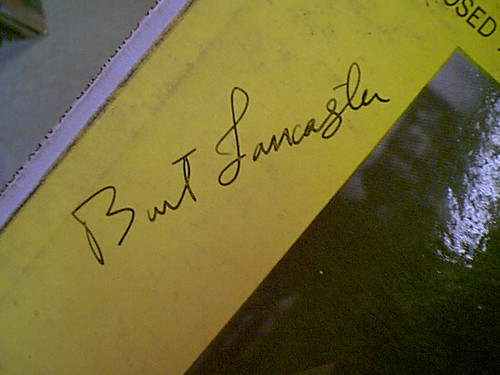