This item is a 9" X 13", black and white photo of musician Lenny Kravitz.

Leonard Albert Kravitz (born May 26, 1964) is an American singer-songwriter, record producer, multi-instrumentalist, and actor. His style incorporates elements of rock, blues, soul, R&B, funk, jazz, reggae, hard rock, psychedelic, pop and folk. Kravitz won the Grammy Award for Best Male Rock Vocal Performance four years in a row from 1999 to 2002, breaking the record for most wins in that category and setting the record for most consecutive wins in one category by a male. He has been nominated for and won other awards, including American Music Awards, MTV Video Music Awards, Radio Music Awards, Brit Awards, and Blockbuster Entertainment Awards. Kravitz's hit singles include "It Ain't Over 'til It's Over" (1991) and "Again" (2000), each of which reached the top 10 on the Billboard Top 100 chart; other hits include "Let Love Rule" (1989), "Always on the Run" (1991), "Are You Gonna Go My Way" (1993), "Fly Away" (1998), and "American Woman" (1999), each of which reached the top 10 on the Alternative Airplay chart.Kravitz was ranked at No. 93 on VH1's "100 Greatest Artists of Hard Rock". He was made an Officer of the Ordre des Arts et des Lettres in 2011, and has played Cinna in the Hunger Games film series. In his career, Kravitz has sold over 40 million albums worldwide. He is the son of actress Roxie Roker, the cousin of television anchor Al Roker, and the father of actress Zöe Kravitz. The photo has been autographed by Lenny Kravitz...................BOTH PHOTO AND AUTOGRAPH ARE IN EXCELLENT CONDITION. 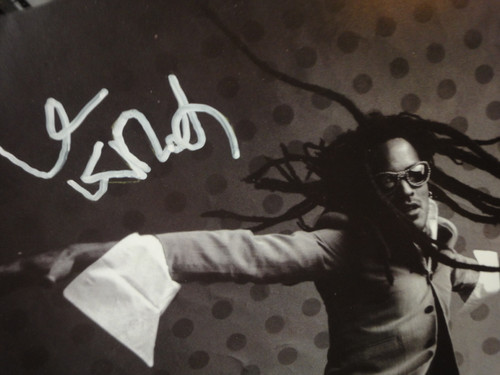