This item is an 8" X 10",black and white photo of Kevin Kline and Sissy Spacek in a scene from the 1986 Movie-"Violets Are Blue".This small-town romance may be trying to ride the coattails of the Big Chill that also featured Kevin Kline. Kline plays Henry here, and when the film opens he and his love Gussie Sawyer (Sissy Spacek, wife of director Jack Fisk), are sitting together planning the future they will have. She will be a flight attendant and he will get a college degree. Yet when they part, so does their destiny. By a quirk of fate, Gussie starts taking photos for an in-flight magazine and ends up an ace photographer while Henry has stayed in their small town to run the newspaper after his dad died. When Gussie comes back for a vacation 15 years later the two old sweethearts find that the embers that burned so low over the last many years are heating up again. No one in the town is unaware of what is going on, and Gussie is in for a lecture from her dad while Henry hears it like it is from his wife. But will that change the course of their relationship? The photo has been autographed on the front by Kevin Kline and Sissy Spacek........BOTH PHOTO AND AUTOGRAPHS ARE IN VERY GOOD CONDITION................... 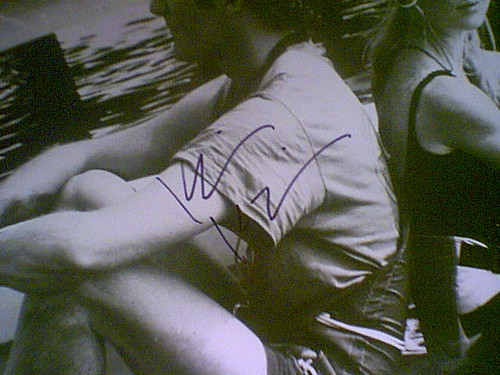