This is an authentically autographed photo by Val Kilmer... This is a 8 inch by 10 inch black and white photo signed by Val Kilmer, condition of the photo and autograph is VERY GOOD. Val Edward Kilmer[1] (born December 31, 1959) is an American actor. Originally a stage actor, Kilmer became popular in the mid-1980s after a string of appearances in comedy films, starting with Top Secret! (1984), then the cult classic Real Genius (1985), as well as blockbuster action films, including a role in Top Gun and a lead role in Willow. During the 1990s, Kilmer gained critical respect after a series of films that were also commercially successful, including his roles as Jim Morrison in The Doors, Doc Holliday in 1993's Tombstone, Batman in 1995's Batman Forever, Chris Shiherlis in 1995's Heat and Simon Templar in 1997's The Saint. During the early 2000s, Kilmer appeared in several well-received roles, including The Salton Sea, Spartan, and supporting performances in Kiss Kiss Bang Bang, Alexander and as the voice of KITT in Knight Rider. 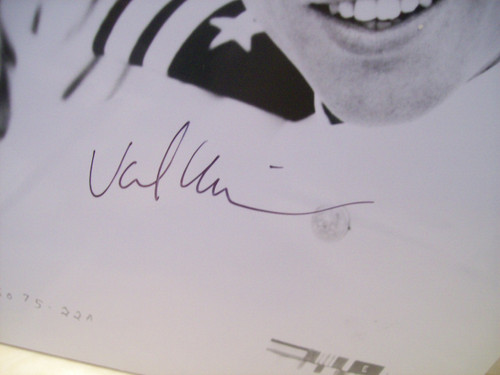