THIS IS AN UATHENTICALLY AUTOGRAPHED PHOTO BY NASTASSJA KINSKI... THIS IS A 8 INCH BY 10 INCH BLACK AND WHITE PHOTO SIGNED BY NASTASSJA KINSKI. CONDITION OF THE PHOTO AND AUTOGRAPH IS VERY GOOD. Nastassja Kinski (born Nastassja Aglaia Nakszy?ski, 24 January 1961) is a German actress, who has appeared in more than 60 international movies. Her starring roles include her Golden Globe Award-winning portrayal of 'Tess Durbeyfield' in Roman Polanski's film Tess, her roles in two erotic films (Stay As You Are and Cat People), and her parts in Wim Wenders' films The Wrong Move, Paris, Texas, and Faraway, So Close!. In the late 1970s and throughout the 1980s, Kinski was widely regarded as an international sex symbol: Richard Avedon's photo of her nude with a large python, marketed as a poster, is iconic even for those who do not know her name or Avedon's. 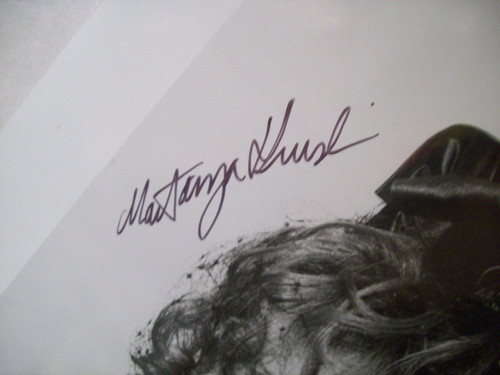