Henry Kissinger-"White House Years"-1979-Little Brown-6" X 9"-1514 pages-Hardcover Book-With Jacket-With Photos-First Edition-Signed By Author.Henry Kissinger was an advisor and Secretary of State to President Richard Nixon, and a key player during the Vietnam War. Henry Kissinger came to the United States from Germany in 1938. He served in the Army and was educated at Harvard University, where he then served on the faculty from 1954-71. In the Nixon administration, Kissinger served as the president's National Security Advisor and then Secretary of State. Kissinger was the go-between in the secret negotiations that eventually opened relations between the U.S. and communist China. He was awarded the Nobel Peace Prize in 1973 for his role in arranging a ceasefire in North Vietnam. In the 1980s and '90s Kissinger continued to write, lecture and appear on TV as a foreign affairs expert, but he also made the news when international human rights groups called him a war criminal for his role in the bombing of Cambodia and for propping up Chilean dictator Augusto Pinochet. An elder statesman with international ties to business and politics, he is the chairman of Kissinger Associates in New York, a consulting firm for multinational corporations. In November of 2002 George W. Bush named Kissinger to head a government inquiry into the terrorist attacks of 11 September 2001. The next month Kissinger stepped down, citing potential conflicts of interest with his private political consulting firm.The book has been autographed on the title page by Henry Kissing.........BOTH BOOK AND AUTOGRAPH ARE IN VERY GOOD CONDITION. 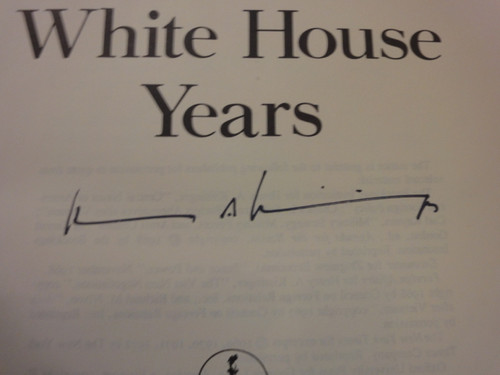