THIS IS AN AUTHENTICALLY AUTOGRAPHED PLAYBILL BY ALAN KING.. THIS IS A 5 1/2 INCH BY 9 INCH PLAYBILL FROM THE PLAYHOUSE-1966-"THE IMPOSSIBLE YEARS"-PHOTO COVER IS SIGNED BY ALAN KING-CONDITION OF THE PLAYBILL AND AUTOGRAPH IS VERY GOOD. Alan King (December 26, 1927  May 9, 2004) was an American comedian known for his biting wit and often angry humorous rants. King became well-known as a Jewish comedian and satirist. He was also a serious actor who appeared in a number of movies and television shows. King wrote several books, produced films, and appeared in plays. In later years, he helped many philanthropic causes. 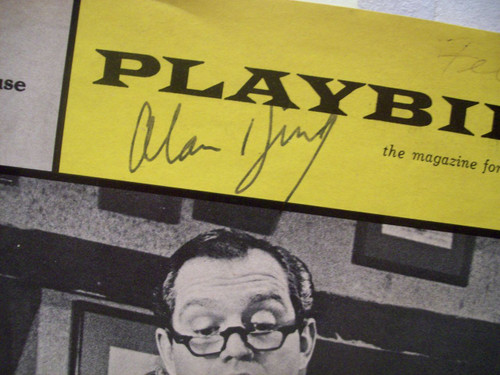