Saturday Evening Post Magazine-June 5,1965-98 pages. This vintage Post Magazine-which originally sold for twenty five cents-features a color cover of Teddy Kennedy-"Is He Running For President?". The Post Magazine also features a five page article with photos on Ted Kennedy-"Massachusetts: Rogues And Reformers In A State On Trial".A Democrat from Massachusetts, Edward Moore Kennedy was first elected to the United States Senate in 1962 to finish the term of his brother, John F. Kennedy. (JFK had become president in 1961.) "Teddy" was re-elected in 1964 and then again for seven additional terms. (He was reelected most recently in 2006.) He has a reputation as a hard-working liberal on issues such as education and health care, but his personal life (including past tales of drinking and womanizing) has frequently been a hot topic for gossip columnists. In 1969 Kennedy was involved in a car accident in which a young woman, Mary Jo Kopechne, drowned on Chappaquiddick Island, off the coast of Massachusetts. Kennedy was convicted of leaving the scene of an accident and his sentence was suspended. Kennedy ran for president in 1980 but was defeated for the Democratic nomination by incumbent president Jimmy Carter. Over time he became one of the Senate's elder statesmen, know for his bipartisan friendships with conservative Senator Orrin Hatch and others. Kennedy had a seizure in May of 2008, after which he began treatment for a malignant brain tumor, but remained in the Senate.Kennedy's older brother Robert F. Kennedy also was a U.S. senator, from New York state, before his 1968 assassination... Kennedy was married to the former Virginia Joan Bennett from 1958 until their divorce in 1984; they had three children, Kara, Edward Jr., and Patrick... He married the former Victoria Reggie in 1992... As unlikely as it may seem, Kennedy is reportedly good friends with conservative senator Orrin Hatch of Utah.The Post Magazine has been autographed on the front by Ted Kennedy............BOTH MAGAZINE AND AUTOGRAPH ARE IN VERY GOOD CONDITION..................... 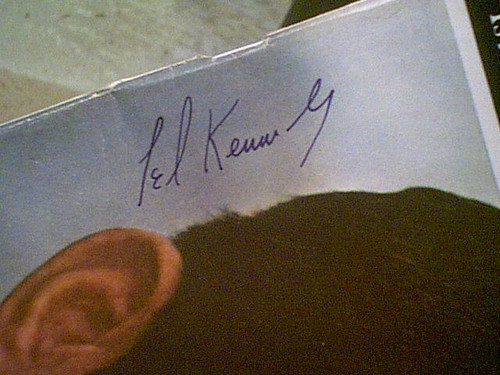