This item is an 8" X 10",black and white photo of Stacy Keach in a scene from the 1985 CBS Television Show-"Mickey Spillane's Mike Hammer".The photo has an original typed and dated byline on CBS Stationery explaining the show and giving date of broadcast.Mickey Spillane's Mike Hammer, with Stacy Keach in the title role, is a television series that originally aired on CBS from January 28, 1984 to January 12, 1984. The series was comprised of 24 sixty minute episodes. The show followed the adventures of Mike Hammer, the fictitious private detective created by crime novelist Mickey Spillane, as he hunts down criminals on the mean streets of New York. Unlike the previous television series, starring Darren McGavin, Spillane was closely involved with - and quite proud of - this incarnation. While firmly situated in the 1980s, the tone of the show also incorporated elements of classic film noir detective films, such as The Maltese Falcon. For example, each show featured the protagonist's narrative voice-over and, much like the archetypal hard-boiled detectives of years gone by, Hammer would rarely be seen without his wrinkled suit, fedora and trench coat. While his get-up made a particularly awkward fashion statement for the time, the juxtaposition of old and new was a central theme in the show. Indeed, Keach's Mike Hammer left the viewer with the impression that this detective had been somehow transported from a 1940s film set to 1980s New York City. The show's theme song "Harlem Nocturne" by Earle Hagen, a jazz tune featuring a deeply melancholy saxophone, set a gritty tone for each episode. The song proved to be one of the most popular elements of the program. The photo has been autographed on the front by Stacy Keach.................CONDITION OF PHOTO,BYLINE AND AUTOGRAPH IS EXCELLENT................... 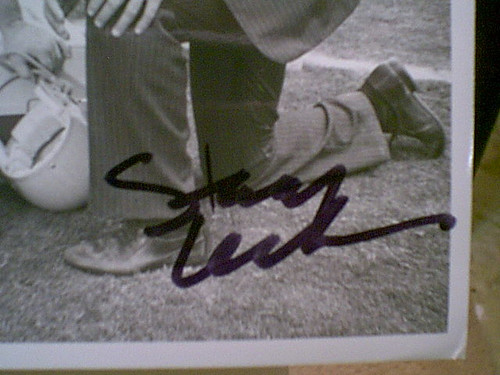