John F. Kennedy President Life Magazine 1957 Signed Autograph Color Cover--------------------------"Life Magazine"-March 11, 1957-10" X 14"-185 pages-Signed by Senator John F. Kennedy. This vintage Life Magazine-which originally sold for twenty cents features a full color cover photo of Senator John F. Kennedy Plus a 6 page article with photos written by him-entitled-"Where Democrats Should Go From Here".......John Fitzgerald Kennedy (May 29, 1917  November 22, 1963), often referred to by his initials JFK, was an American politician who served as the 35th president of the United States from 1961 until his assassination in 1963. Kennedy served at the height of the Cold War, and the majority of his work as president concerned relations with the Soviet Union and Cuba. A Democrat, Kennedy represented Massachusetts in both houses of the U.S. Congress prior to becoming president. The Life Magazine has been autographed on the front cover by John Kennedy with a fountain pen in black.............BOTH MAGAZINE AND AUTOGRAPH ARE IN VERY GOOD CONDITION. 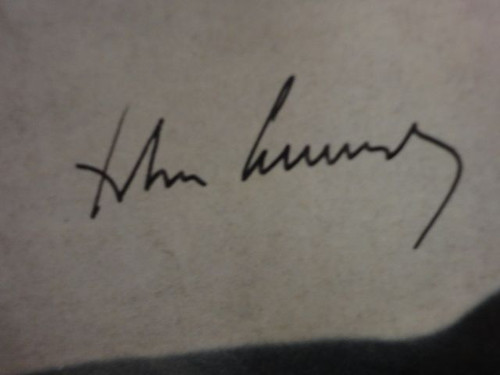