This item is a 10 1/2" X 11 1/2",black and white lithograph photo of actor Harvey Keitel. The lithograph photo has been mounted on a 10 1/2" X 11 1/2" piece of photography paper.Harvey Keitel is a movie actor best known for playing streetwise toughs, notably in films by Martin Scorsese and Quentin Tarantino. Keitel grew up in Brooklyn and was in the U.S. Marines in Lebanon (1958) before becoming a member of New York's Actor's Studio. He appeared in Scorsese's first feature, Who's That Knocking At My Door (1967, also titled I Call First), and led the cast of Mean Streets (1973), a breakthrough for Keitel, Scorsese and young Robert DeNiro. Keitel then furthered his reputation as an intense portrayer of complex characters in Ridley Scott's The Duellists (1977) and James Toback's Fingers (1978). During the 1980s he made movies in Europe and stepped out of the limelight, then turned in a sturdy performance as Judas in Scorsese's The Last Temptation of Christ (1988). His career as a reliable character actor took off in the early '90s, with roles in Thelma & Louise (1991, with Geena Davis and Susan Sarandon), Bugsy (1991, Oscar nomination) and The Piano (1993, starring Holly Hunter). He also played Mr. White in Tarantino's Reservoir Dogs (a film he helped finance), Mr. Wolf in Pulp Fiction, and a twisted cop in Bad Lieutenant (1992). Despite a solid reputation as a dramatic actor, Keitel has had success at comedy as well, including 1992's Sister Act (with Whoopi Goldberg) and 1995's Smoke (with William Hurt). He began a new series on TV, Life On Mars, in the fall of 2008.The photo has been autographed on the front by Harvey Keitel.....BOTH PHOTO AND AUTOGRAPH ARE IN VERY GOOD CONDITION.............. 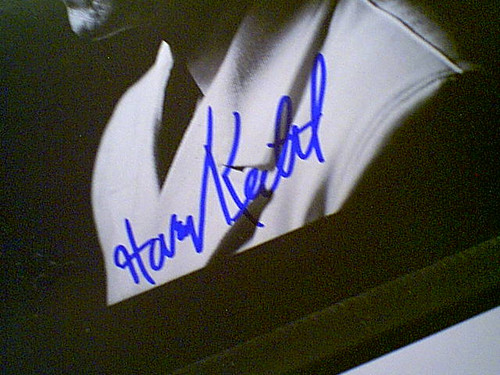