THIS IS AN AUTHENTICALLY AUTOGRAPHED LP BY GEORGE KENNEDY.. ORIGINAL MOTION PICTURE SOUNDTRACK-ELECTRONIC SCORE BY SYNERGY-COMPOSED AND PRODUCED BY LARRY FAST-THE JUPITER MENACE(PASSPORT PB 6014)COVER IS SIGNED BY GEORGE KENNEDY. BACK COVER HAS ORIGINAL SCENES FROM DOCUMENTARY. CONDITION OF THE VINYL,COVER, AND AUTOGRAPH IS VG. If you like watching UNSOLVED MYSTERIES, IN SEARCH OF series with Leonard Nimoy, or these kind of shows seen on TLC, you'll probably like THE JUPITER MENACE. The events they say will occur never happened in real life but that doesn't mean the film doesn't contain some interesting bits of information or ideas, most of which have been widely copied ever since. Because of the overall familiarity of the subject, I'd say that TJM is probably the most ripped-off movies of all time. And yet, few people know about it. It is very obscure. Best-selling author Graham Hancock and his books about ancient civilizations predicting the end of the world, world wide cataclysmic events, the poles shifting, Antarctica, etc, basically took his ideas from this pseudo-documentary. Seriously, Hancock became a millionaire by little or no research. He just watched THE JUPITER MENACE. Anyway, I love watching obscure movies and this one is really obscure. I only heard about this 20 year old movie in the past couple of weeks. I always keep an open mind with these kind of pseudo-scientific films. It's always easy for me to overlook the silly stuff and simply keep the really interesting ideas. And THE JUPITER MENACE does have a lot of interesting things about it amidst the goofier stuff. Also, on a sociological level, it's an interesting time capsule. I didn't regret buying the video on eBay. 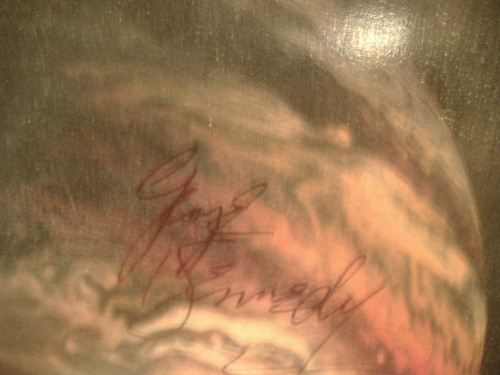