This item is an 11 1/2" X 13", color lithograph photo of a 1977 Rolling Stone Magazine cover featuring Daine Keaton. Please note-this is not a Rolling Stone Magazine. It is a photo taken from a compendium of color Rolling Stone covers.Diane Keaton became a star in the 1970s, thanks in large part to her personal and professional relationship with Woody Allen. She appeared with him in Play It Again, Sam (1972, reprising her role from the Broadway play), Sleeper (1973), Love and Death (1975) and, most notably, in Annie Hall (1977, for which she won an Oscar). Although more famous for her comic abilities, she held her own in dramas, including the Francis Ford Coppola series of The Godfather movies, starting in 1972. After she split with Allen, Keaton dated Warren Beatty, her co-star in Reds (1981), and appeared in more dramatic roles, including Looking For Mr. Goodbar (1977), The Little Drummer Girl (1984, from the book by John Le Carré), and Mrs. Soffel (1984, with Mel Gibson). In the '80s and '90s Keaton also gained critical respect as a photographer and for directing movies, music videos and television shows (including an episode of David Lynch's Twin Peaks). As an actor, she had continued box office success in comedies, especially with The First Wives Club (1996, with Bette Midler) and Father of the Bride (1991, with Steve Martin). Although she has worked steadily since the 1970s, her Oscar-nominated performance in 2003's Something's Gotta Give (with Jack Nicholson) was hailed by some as a "comeback." Her other films include Shoot the Moon (1982), Baby Boom (1987) and Because I Said So (2007, with Mandy Moore).The lithograph photo has been autographed on the front by Diane Keaton.............BOTH PHOTO AND AUTOGRAPH ARE IN VERY GOOD CONDITION. 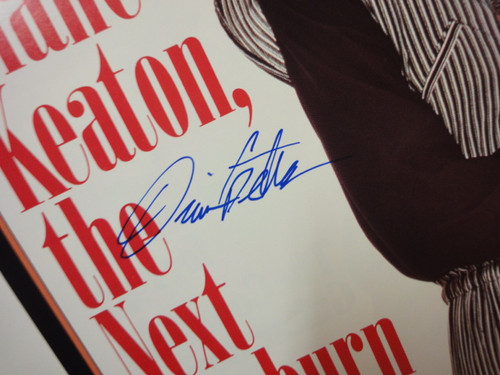