THIS IS AN AUTHENTICALLY AUTOGRAPHED LP BY MICHAEL LEMBECK, DEBRA CLINGER, MICKEY MCMEEL, LOUISE DUART... KAPTAIN KOOL AND THE KONGS(PETER PAN 8221)STORIES FROM THE KROFFT TV SUPERSHOW INCLUDING MAGIC MONGO, BIG FOOT AND WILD BOY AND THE WONDERBUG. LP HAS CUT UPPER LEFT CORNER. PHOTO COVER IS SIGNED BY MICHAEL LEMBECK, DEBRA CLINGER, MICKEY MCMEEL, LOUISE DUART. TRACKS: TURKEY JOKES, THE ADVENTURES OF BIG FOOT AND WILD BOY, MAGIC MONDO AND WONDERBUG AND HIS FRIENDS. CONDITION OF THE VINYL, COVER, AND AUTOGRAPHS IS VG. For the first season, Kool and Kongs were portrayed as a wacky glam rock band; for season two, their image was toned down somewhat, and they were downsized from a five to a four-person band. In either incarnation, the band would introduce the other live action segments, as well as perform skits and songs. Most of the songs were written by the Osmonds. After they were replaced by the Bay City Rollers, the group made appearances on other Sid and Marty Krofft productions, including Donny & Marie and the The Brady Bunch Variety Hour. They also made an appearance on Dick Clark's American Bandstand. 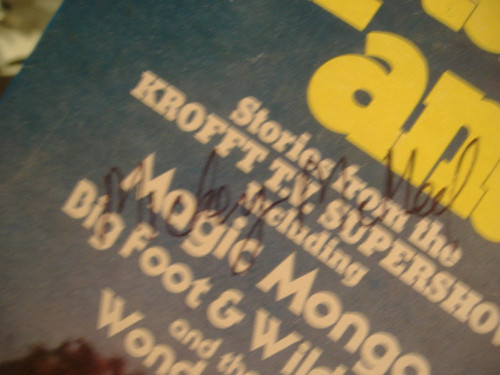