This item is an 8" X 10", black and white publicity photo of actor Boris Karloff as he appeared in the 1958 movie "Frankenstein 1970". Frankenstein 1970 is a 1958 science fiction/horror film, shot in black and white CinemaScope, starring Boris Karloff and featuring Don "Red" Barry. The independent film was directed by Howard W. Koch, written by Richard Landau and George Worthing Yates and produced by Aubrey Schenck. It was released theatrically in some markets on a double feature with the Zsa Zsa Gabor film Queen of Outer Space.Alternative titles during pre-production included Frankenstein's Castle, Frankenstein 1960, and Frankenstein 1975. Shot in a mere eight days on a modest budget, the film was finally titled Frankenstein 1970 to add a futuristic touch. The film's main set was borrowed from the 1958 movie Too Much, Too Soon. The photo has been autographed on the front by Boris Karloff with a fountain pen in black............BOTH PHOTO AND AUTOGRAPH ARE IN VERY GOOD CONDITION. 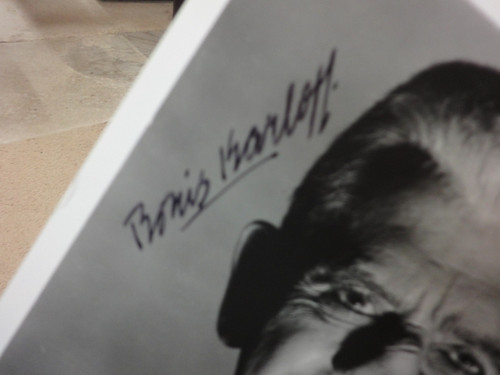